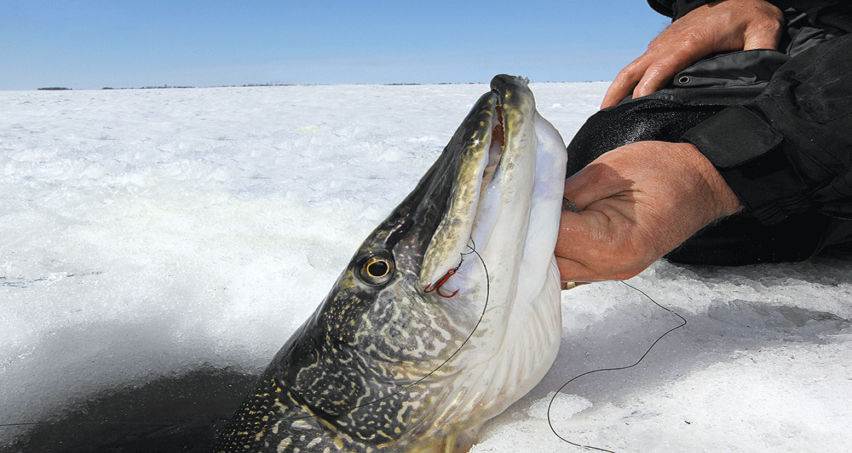 Fishing for northern pike in winter is not an easy task, as it requires skill and careful preparation. Pike is a fairly strong fish, so the tackle for it must be rigid and reliable. Choosing a northern pike bait is equally as important.

But how does one find the perfect lure for northern pike ice fishing among the wide variety of baits available on the market today? Should you go for jigging baits or experiment with spoon models? In this guide, we have collected the top three lure sets that will not leave you empty-handed at the end of your ice fishing experience. 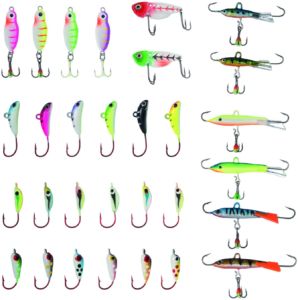 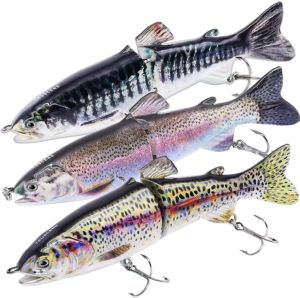 When composing a collection of lures for pike, it is worth buying two types of models – naturalistic and provocative colors. They can be interchanged on a fishing trip to determine which fish prefers on that particular day. The Bassdash bait set offers the widest variety of ice fishing baits on this list.

Items/box:
30
Material:
Lead
Type:
6 x balancing jigs, 2 x vibrating bait, 4 x spoons, 18 x jig heads
Number of hooks:
4 x treble, 6 x 1 treble and 2 jigs, 18 x jigs, 2 x 2 double
Target fish:
Perch, walleye, pike
Storage box:
Yes
Show More
We like
Some of the top qualities Bassdash baits possess are:
we dont like
After about 50 fishes caught, you might want to get a new lure of the same kind. As some fishermen claim, Bassdash lures are so good that the northern pikes keep scratching the paint off them. As much as it is a positive thing, be ready for some additional investments in the long run.
PROS
Cons
Check Latest Price

TRUSCEND fishing baits work perfectly for jigging on hard water, making them suitable for northern pike ice fishing. Besides, it is the largest lure in this list, being big enough to handle a strong pike.

Items/box:
3
Material:
Plastic
Type:
Swimbaits
Number of hooks:
2 x Treble
Target fish:
Bass, yellow perch, walleye, pike, muskie, roach, trout, snook, salmon, and more
Storage box:
No
Show More
We like
This bait kit is an excellent solution due to the following advantages:
we dont like
Some fishing enthusiasts are skeptical about the TRUSCEND fishing set because it is more costly than other similar options on the market. It is, indeed, the priciest item on this list. However, it is one of the best and most durable options for northern pike fishing, so it may be well worth the price.
PROS
Cons
Check Latest Price

This is a set of lures that contains seven types of ice fishing baits. Some of them are northern pike fishing staples, being ideal for jiggling up and down. The set includes lures that are retrievable at various speeds. For an active predator, such as northern pike, it is advisable to let this bait sink for a while and then jig off the bottom.

Items/box:
31
Material:
Lead + high carbon steel hook
Type:
Jigging baits
Number of hooks:
2 x 1 Treble and 2 jigs 29 x 1 jig
Target fish:
Bluegills, panfish, perch sunfish, walleyes, pike, crappies, and more
Storage box:
Yes
Show More
We like
The THKFISH lure set is a perfect option for both beginners and ice fishing experts. Here are some of its key characteristics:
we dont like
It is impossible to choose specific colors that can be named as universal for pike fishing. Fish preferences differ depending on the reservoir and time of year.It is always wise to have a set of several colored bait options at hand when it comes to northern pike. Thus, buying a value pack of 31 baits might be a better investment than purchasing one piece.
PROS
Cons
Check Latest Price

Choosing the best northern pike ice fishing bait is a challenge, especially for beginners. That is why it is critical to invest time and effort into research before making the purchase.

What Is the Best Bait for Northern Pike Ice Fishing?

Take a fairly large bait with a length of approximately 3 inches. There is no specific lure color that works best. It is recommendable to have several bait types and experiment with those.

Select the bait weight depending on the fishing location: in calm and shallow water, use lighter ones; in the current and depth – heavier.

Where to Fish for Northern Pike in Winter

Catching pike in winter requires searching. It may require tens of holes to be drilled. To narrow the search area for winter pike sites, you should pay attention to such areas of the reservoir as:

Pike are alert when there is noise on the ice surface, so start fishing from the first drilled hole.

What Is the Best Pike Ice Fishing Strategy?

Ice fishing for pike differs from the open water season due to the behavior of this predator. While the fish thrives in the summer and autumn, greedily attacking the prey fish, in winter, it goes through harsh times. Accordingly, the activity of pike during this period is lower. The habits of the northern pike in winter directly depend on the external weather conditions, the oxygen content in the water, and the prey fish’s location.

There is no need to expect short and unpredictable hunting sprees when the predator grabs everything that moves in the water. The pike is not a raider but an ambush hunter. Therefore, the point of search tactics while fishing is to find such an ambush.

The behavior of pike in winter is cyclical – the more severe the conditions, the more passive the fish. But even in the most unfavorable times, the predator continues its hunt at a slower pace.

Tips to Catch the Northern Pike in Winter

In winter, it is critical to reduce the overall speed and intensity of fishing. If in summer, the process happens quickly, in winter, you need to wait for the pike. Therefore, the correct choice of the place of fishing is critical.

It is essential to study the pike’s general behavior and conduct observations at a specific water body during the season. Only then will it be possible to try predicting the pike’s behavior for that particular location.

Crucial Factors to Consider Before Ice Fishing for Northern Pike

Pike habitats in winter directly depend on the oxygen content in the water and the availability of food fish. In winter, the predator fish prefer to stay where the water’s oxygen saturation is slightly higher than in other parts of the reservoir. At low temperatures, pike cannot efficiently produce oxygen, so it is simply easier for them to breathe where there is more of this gas in the water. Pike also cannot conduct long hunts since energy saving is the primary condition for survival.

Pike fishing in winter is a popular activity among fishermen. With some knowledge of pike habits, ice fishing brings a lot of catch and tons of excitement. Using the right bait is one of the steps to succeeding in this challenging task. Keep in mind that the best northern pike ice fishing bait is a highly subjective term and depends on a variety of factors. 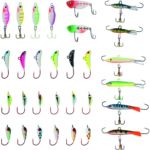 Check Price
Newsletter
Subscribe to get all the hottest news !